Events such as the November 15 Lalanga Fou fono; Tulī takes flight fono in Tokoroa are essential to capture the true voice of Pacific communities across the country.

“Familiarising the Ministry for Pacific Peoples (MPP) within the communities, especially in the regions, will lead to positive engagements in the future and build the credibility and trust of the Ministry with our people,” Julius says.

In 2018, at just 25 years old, Julius, of Cook Islands descent, became the youngest appointed General Manager or Chief Executive of any YMCA throughout New Zealand.

“With nine full-time staff, five casual and 25 volunteers, I oversee all our operations which include providing youth and children services to our South Waikato Community with a specific focus on building strong kids, strong families and strong communities,” Julius explains.

Having been raised in Tokoroa in the “Pacific way” by his parents and grandparents, extended family, members of his church and the wider Cook Islands community throughout the region, Julius is very familiar with the area and what makes it tick.

“One of the many benefits of being raised in small but close and tight-knit community is everybody knows everybody else’s business and our parents and elders often correct us and set us up for greater opportunities.

“This is what I have learned is a common value shared among all Pacific cultures.”

He is heavily involved in the Tokoroa Cook Islands community and is Vice Chairman of the Araura Enua Trust Tokoroa and works to promote events and engagements with young Aitutakian and Cook Islanders in Tokoroa.

Julius also works with the South Waikato District Council alongside other Pacific leaders in the community to solidify plans for a Pasifika Advisory Board to the Council.

Throughout the past year, MPP has been hosting a series of fono in regional New Zealand, to reconnect with the Pacific communities in the regions, hear their concerns and aspirations, as well as share what has been achieved since the launch of the new Pacific Vision and Lalanga Fou report in November 2018.

Julius was asked to take part in the upcoming fono, by one of South Waikato’s leading Pacific stalwarts, Akarere Henry.

“She is a true champion of all things Pasifika in the South Waikato community, and I will be presenting at the fono about my work alongside her about opportunities for Pacific people in our community,” he adds.

There is a common theme in all of Julius’ work he does at various organisations, which is to improve Pacific peoples’ wellbeing in South Waikato.

South Waikato YMCA works with youth and children in the community, providing opportunities for them to build capacity and resilience; and Araura Enua Trust Tokoroa’s core focus is to engage the diaspora of Aitutakians in particular but extends to the wider Cook Islands community to re-engage with our traditional Cook Islands cultural practices and work towards the promotion of Aitutaki.

Meanwhile, the Pasifika Advisory Board will give the Council the direct Pasifika voice it currently lacks, Julius says.

At the Lalanga Fou: Tulī takes flight fono in Tokoroa, Pacific people will be provided with the opportunity to have their say about what they want to see happen for Pacific in Aotearoa, and throughout the regions – how they can become Prosperous Pacific Communities.

“More ministries and organisations need to come to the community,” Julius says.

“For too long communities have shared what their issues are but constantly feel like their words are falling on deaf ears.

“From experience, the best way to engage with our people is go to them at their homes, their churches, sports clubs and their communities.

“We want to see, hear, taste and smell the success with not just Pacific communities, but every community,” he adds.

Visit Pacific Aotearoa to reserve a place at the fono, on November 15 at Tokoroa’s South Waikato Events Centre. 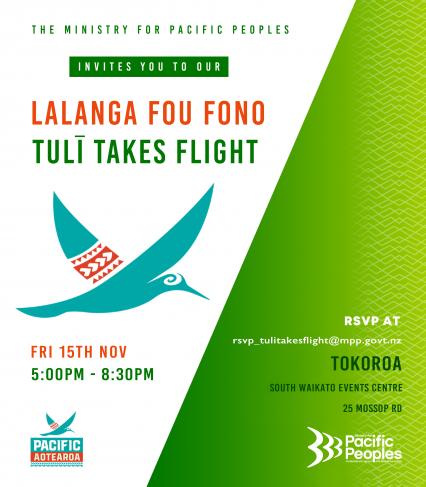