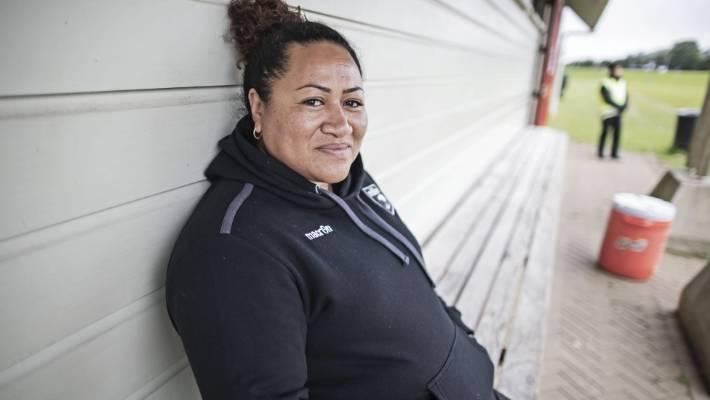 Luisa Avaiki Tavesivesi is an ambassador for rugby league in Aotearoa having either played the game, or been involved from the sidelines for almost 30 years.

The New Zealand Rugby League (NZRL) Wellbeing/Women’s Development Manager has been recognised with a Member of the New Zealand Order of Merit (MNZM) for services to rugby league in the New Year’s Honours.

“I have always been aware of how my platform in sport could affect positive change or help me to make a difference with those I worked and served with,” Luisa says.

Of Samoan and Niuean descent, Luisa moved to New Zealand from Samoa in 1976 as a child, and was raised in West Auckland, attending Avondale College.

With brothers who played league, a young and athletic Luisa also had a love for the game; however, rugby league was not offered to girls in primary school right through to high school at that time.

“My earliest memory of having a go at a game like rugby league was playing bullrush at home with my brothers and cousins, and of course school rugby at interval and lunchtime with the boys.

“At age 20 I met a friend who invited me to a training session for women at Richmond Rovers Rugby League.

“This was my true introduction to the game … I went to training and along to a game where I was asked to play - the rest is history.”

Luisa has stayed with Richmond throughout her playing career and on retiring, started her coaching journey at the club.

She is still involved and contributes as a mentor for the women’s team, and she is also the Assistant Coach for the Premier Men.

“I am very fortunate to still be in the game and employed by NZRL to carry out wellbeing and education programmes, and support youth age group representative sides as well as the Kiwi Ferns.

“My role in women’s development also allows me to support any developments in the women’s game at grassroots right up to representative level.”

These opportunities have allowed Luisa to prepare for roles in the game at various levels, right up to NRL level.

Rugby league is still very male dominated in a lot of areas, and Luisa has come up against barriers, and has felt uncomfortable in areas of her work at times, she says.

However, her parents have instilled in her to always give her best in all areas she is called to work in.

“Along the way what continues to maintain that inspiration is the desire to give back and contribute to clubs, organisations and especially players in the game because people invested in my development and journey in the game.

“I have been an ambassador for the game for so long and feel a responsibility to leave the game in a better state than it was when I was playing.

“I feel privileged to still be part of the game and contribute in some way to its growth.”

Luisa says she has always had some kind of involvement in programmes or work which have included a high population of the Pacific community.

“My rugby league club and team had a high majority of Pacific members, so while I didn’t intentionally set out to focus and help just the Pacific community, it became an easy transition because of my own experiences and understanding of Pacific, being Pacific and therefore being able to make easy connections to the Pacific community.”

It is her goal to help any player who wants to be a part of the game and have positive and meaningful experiences while playing league, she adds, and it is her parent’s work ethic, service-leadership, prayers, teachings and courage which inspire Luisa to push through with her ambition.

Receiving an MNZM is recognition of all the sacrifices they made for their children, she adds.

“My parents migrated from the small island of Samoa to New Zealand to give us opportunities for a better future and I feel proud that I represent my family particularly my parents when I do achieve something.

“They taught me from very early age that my actions, behaviours and successes represent our family and a wider group than myself, so what this also means for the rugby league community particularly women’s rugby league is huge.”

This resilient, prosperous, confident and thriving Pacific woman in Aotearoa says to be acknowledged in the New Year’s Honours reinforces God’s plan and purpose for her in the game of rugby league.