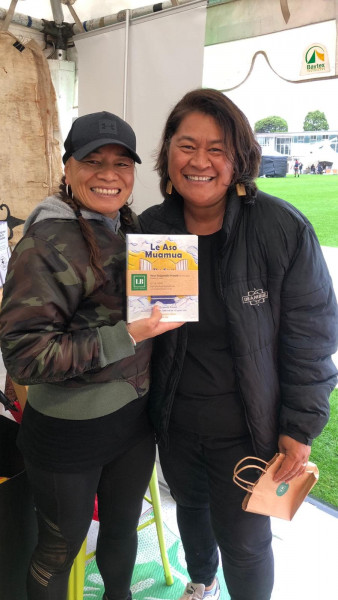 Creator of Legacy Books Nesa Tuigamala Prasad says the Ministry for Pacific Peoples (MPP) is an answer to prayer.

The West Auckland Teacher, who is of Samoan descent, started to develop bilingual biblical resources after she found it challenging to find them while studying for her Masters of Education (Hons).

“When I started researching for my Masters, I spent a couple of weeks looking for appropriate resources to use in my field studies but did not find any readily available,” Nesa explains.

She says the ones which are available, have been tailored to the American curriculum, and none of the resources are in Pacific languages.

“Bible stories currently in print are great for reading to our children or those who are able to read independently but are not necessarily tailored to emergent bilinguals,” Nesa says.

“My own children learnt to read using Bible stories and became great readers.

“They didn’t like reading for leisure, but they thoroughly enjoyed the Bible stories.”

Legacy Books was birthed out of the need to see familiar texts from home such as the Bible stories, used in the classroom to support Pacific childrens’ literacy achievement in reading comprehension.

The use of these familiar stories from home also encourages them to maintain and keep their language alive, Nesa shares.

She got to work on developing the bilingual resources to help emergent bilingual children improve reading comprehension using familiar texts such as Bible stories, trans-language strategies and digital tools.

“The books can be used for guided reading resources as well as shared reading and they have been developed so teachers who may not speak the child’s first language, are able to read alongside the children, with the different tools available such as the glossary at the back of each book as well as the online audio support (still being developed).

“Legacy Books is leaving a legacy of faith, language and culture for generations to learn and love.”

To proceed with her project, Nesa applied to MPP’s Community Languages Fund, which has enabled her to release two books of a series - In the Beginning – which consists of seven books.

The books were published during December 2020, in six languages including Te Reo Māori.

“We are now in the final stages of all seven books in six languages – the Samoan version was released at Pasifika 2021 and Te Reo Māori is complete, and Vagahau Niue, Tongan, Fijian and Cook Island Māori will be released next month with the official launch in June,” Nesa says.

She adds there is great urgency to equip children to be successful readers, and it is her aim to see Pacific children excelling in mainstream schools.

“Success can be achieved by allowing all children to utilise their whole linguistic repertoire to support reading comprehension in our emergent bilinguals.

“Legacy Books allows this as it is in Pacific languages and English; and their identity and culture are valued and used as a tool to succeed.

“It is something that is familiar to them and therefore allows the bridging of home school partnership and increased engagement during reading because of familiar stories.”

Nesa adds that Legacy Books hopes to equip and impact Pacific Aotearoa by allowing children to be successful in literacy practices at home and in classrooms using familiar texts, their home language and digital tools.

“In combining these strategies, we are saying be who you are, use what God has given you; your faith, your language, your culture and when our schools allow that for our Pasifika children, then academic success follows.”

To place an order with Legacy Books, email [email protected].

Visit the MPP website for more information on the Community Languages Fund.