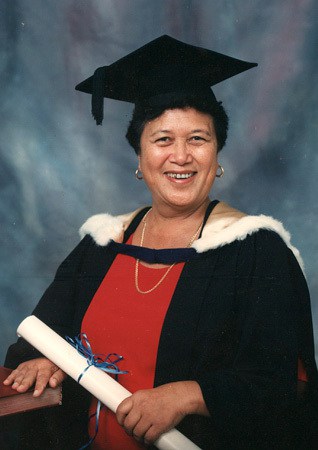 Education provides children the tools to face challenges in life and ensuring Pacific children in Aotearoa and throughout the region have capacity to rise above any obstacle has become the life-long mission of Afamasaga Vaafusuaga Telesia McDonald Alipia.

The pioneer of Pacific early childhood education in Samoa and New Zealand has been recognised in the 2021 New Year’s Honours, where she received an Order of the New Zealand Merit (ONZM) for over three decades of helping young people to achieve their dreams.

Born and raised in Samoa as part of a large family, Telesia’s parents were ministers of the Catholic Church (Catechists) at Falealupo for 36 years.

Telesia was sent to Apia for a better education, and after completing four years of formal education, her father wanted her to take a job to help pay for her younger siblings’ school fees, she says.

“I took up my first job as an Assistant Teacher at a primary school at Moamoa village where I met and married my first late husband Alexander McDonald at 28,” she adds.

Telesia and Alexander had two daughters, Teuila and Shona, who provided Telesia with the inspiration to take up early childhood teaching in the 1970s.

With only four years of formal education behind her, she was hungry for more knowledge.

“I enrolled my daughters at a kindergarten run by a Protestant Minister and his wife in Apia and they hired me on the spot on that very day - this was the beginning of my early childhood education teaching career.”

Telesia went on to receive a Colombo Fellowship Scholarship from Samoa’s Government to study Preschool Education in Perth, Australia in 1972, and in 1990 she was offered a scholarship to study Educational Administration at the University of the South Pacific, Fiji.

“These opportunities really fired up my thirst for knowledge and the start of my pioneering work to develop preschool education in Samoa,” she says.

At that time, research had begun showing how the first five or six years of life are critical for rapid brain growth and development in human beings.

“These facts gave weight to my belief together with a great team of pioneers to push on with developments in early childhood education both in Samoa, other Pacific Islands and in New Zealand,” Telesia says.

“My training team and I established the headquarters at Sogi, Apia, set up early childhood centres all over the country and conducted the teacher training programme.

“In 1991, I was requested by the Pacific Island Early Childhood Council to come to New Zealand to write, develop and spearhead a teacher training programme for Pacific teachers to be taught at Auckland College of Education and the University of Auckland, as well as Whitireia Polytechnic Wellington, Christchurch and Dunedin Colleges of Education.”

The Foundation awarded her a scholarship to research the programme at Hebrew University in Israel and recommended its implementation in New Zealand on her return.

At the end of 1993, she handed over the reins to the growing HIPPY programme to a very capable team to continue delivering the diploma in Pacific early childhood education.

Telesia retired from teacher training in 2006 to set up and manage an early childhood centre in Avondale, Auckland.

After so many years of involvement in early childhood education, there have been many highlights for Telesia, including getting the education field in Samoa, the region, and New Zealand up and running.

“I came to New Zealand feeling good I left a legacy in Samoa for my colleagues to continue.

“Initially, we met with a lot of resistance in Samoa…there was no government funding and we relied on fundraisings and overseas aids.

“Trying to convince parents, government especially the Ministry of Education and the public about the importance of early education was most difficult and our work during these difficult times was a work of faith.”

Now early childhood education is included in the Samoa education system and it is flourishing, as it is in New Zealand, she adds.

Fulfilling her own dreams of gaining an education and leading by example has been a hugely rewarding and satisfying experience for Telesia, who obtained her Bachelor of Education at 50, and her Masters at 55.

While overjoyed at the recognition she has received with the New Year’s Honours, there is so much more work to be done.

“Several important issues I would like every Pacific educator, students, parents, and education institutions to continue challenging is the never-ending inequality still existing in our Pacific community in New Zealand.”

We must all work together with one voice to eradicate this imbalance, she continues.

“I look at success in education as the cornerstone of reaching equality in many spheres of life and this goes hand in hand with cultural knowledge competencies so our faasinomaga lives on.”