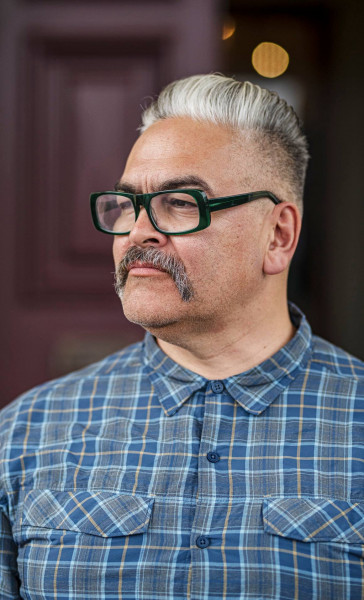 For many years, it has been Playwright Victor Rodger’s goal to take Pacific characters from the background and put them front and centre in all his work.

Instead of “running round in the background in a lavalava”, they are at the heart of the action, as opposed to supporting a palagi narrative, Victor says.

“The realisation I needed to achieve this in my work came about years ago while I was watching a play featuring Samoan Actor Robbie Magasiva, who was doing just that - running round in the background in a lavalava,” he adds.

Victor is widely known for his bold work which deals with race, racism and identity including issues confronting Pacific peoples and voicing issues for the gay community.

In recognition of his extensive work, he has been included in the 2021 New Year’s Honours and awarded an Order of the New Zealand Merit (ONZM) for services in theatre and Pacific arts.

Of Samoan and Scottish descent, Victor started out his writing career as a Cadet Reporter in Christchurch.

“I was inspired to write my first play SONS after a pretty turbulent time in my life when I tried to establish a relationship with my Samoan father, only I didn't know how to negotiate the Samoan culture and by extension my father, who I never lived with,” he explains.

Victor went onto write the multi-award-winning play Black Faggot in 2013, which was performed at the Auckland and Melbourne Fringe Festivals, as well as in Hawai’i and the United Kingdom.

“That desire to have Pasifika characters at the heart of the narrative has always inspired me throughout my career, as well as actors such as Robbie Magasiva and Anapela Polita'ivao, both of whom I have written for,” Victor says.

Within the screen industry he has worked variously as a Writer and Actor on New Zealand television shows Shortland Street, Mercy Peak, and the Māori television series This is Piki.

Inevitably, with every high there have also been challenges during Victor’s career.

“I’d say my greatest highlight, however, was meeting a young, gay, mixed-race fast-food worker in Palmerston North when he was going to see my play Black Faggot for the second time because, as he said, it told his story.

“And the biggest challenge for me would be procrastination and distraction.

“I had a perfect storm of deadlines hit at the same time last year and I just watched YOUTUBE for a week and pretended it wasn't happening.”

The show must always go on, and Victor has a variety of film, television and theatre projects lined up which are keeping him busy, he says.

While he has had a hugely successful career to date, Victor wants to be remembered not only for his work, but ultimately for helping expand the spectrum of Pacific characters and stories presented in theatre, film, television and fiction, he says.