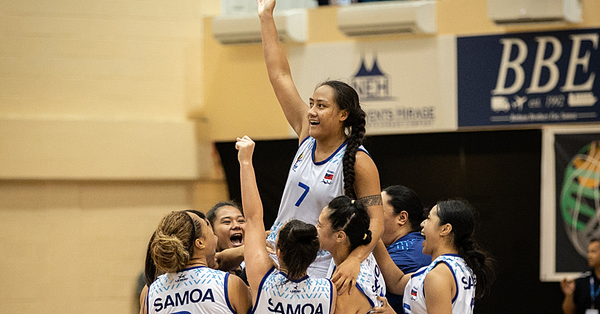 Athletes from all over the Pacific descended on Apia for the biggest Games yet, representing their home countries, and their countries of heritage.

The Samoan Prime Minister Hon. Tuilaepa Aiono Sailele Malielegaoi, who was an archer in Team Samoa addressed the thousands of athletes and supporters at the closing ceremony at Apia Park Stadium.

He says not only has the Games become a great regional sporting event, but it is truly inscribed with much deeper cultural and political importance. The Solomon Islands will host the next Pacific Games in 2023.

For Geraldynn (Dynn) Malama Leaupepe, representing Samoa in women’s basketball was a proud moment not only for her, but her family, which is spread across the United States, New Zealand, Australia, France and Samoa.

“My parents sacrificed so much including leaving their family to provide a better life for me and my siblings,” Dynn says.

“Hearing my family, fans and the people of Samoa cheering for us at our games was so special – it was indescribable.

“It has made their sacrifice worth it, no matter the outcome of the games.”

Dynn is number eight of 10 children in her family, and the identical twin of Geralynn Malaea Leaupepe.

The 23-year-old grew up in Camarillo, California (Ventura County), and started playing basketball for her city youth league as a 10-year-old.

“Once I got to the age of 16, I realised I wanted to play at the collegiate level and I played for NCAA Division 1 side Cal Poly San Luis Obispo.

“Then (last year) I played my first season professionally in Denmark for BK Amager, in which my team won gold in the Dameligaen, the top league in Denmark.”

The women’s basketball at the Pacific Games has been hotly contested, with American Samoa taking the gold in the 5x5; Fiji in second; and Samoa securing the bronze medal after beating a gritty Guam team in the closing seconds of the consolation final.

“This result is very significant for an island that is not so well known for basketball…being able to win bronze and get on the podium with my team has been a huge moment for us,” Dynn says.

“I hope the sport will start to gain more attention and interest throughout Samoa on the back of the Games.”

The opportunity to play in front of her family and Samoa supporters, who had so much pride and faith in the team, was the highlight of the Games for Dynn, as well as seeing the growth in each of her teammates in the little time they have had together.

“I will also not forget the atmosphere and the environment the fans created in the arena every time I stepped onto the court.”